At the end of August, a study was published showing that natural immunity provides much better protection against infection than the Pfizer vaccine. It was described by UCL’s Francois Balloux as “a bit of a bombshell”.

Subsequent studies have compared natural and vaccine-induced immunity at the cellular level. One found that infection-induced antibodies “exhibited superior stability and cross-variant neutralisation breadth” than vaccine-induced antibodies, suggesting that people who’d already been infected had better immunity against the then-novel Delta variant.

However, as I noted in my write-up of the “bombshell” study, its findings still needed to be replicated. After all, certain datasets or methods of analysis can sometimes yield quirky results, which don’t survive independent empirical tests.

Encouragingly, the findings now have been replicated – by another team of Israeli researchers, using a different dataset.

In the latest study, Yair Goldberg and colleagues tracked all the individuals in their dataset (of people in Israel) who had tested positive or received two doses of the Pfizer vaccine before 1st July, 2021. They then compared the number of infections in previously infected versus vaccinated individuals from August to September of 2021.

The researchers also examined the number of infections among those with so-called ‘hybrid immunity’ – i.e., previously infected individuals who got vaccinated.

Results are shown in the chart below. Each bar corresponds to the infection rate per 100,000 ‘risk days’. The reason the researchers used ‘risk days’, rather than just ‘people’, is that the composition of each group changed over time. For example, some previously infected people chose to get vaccinated. 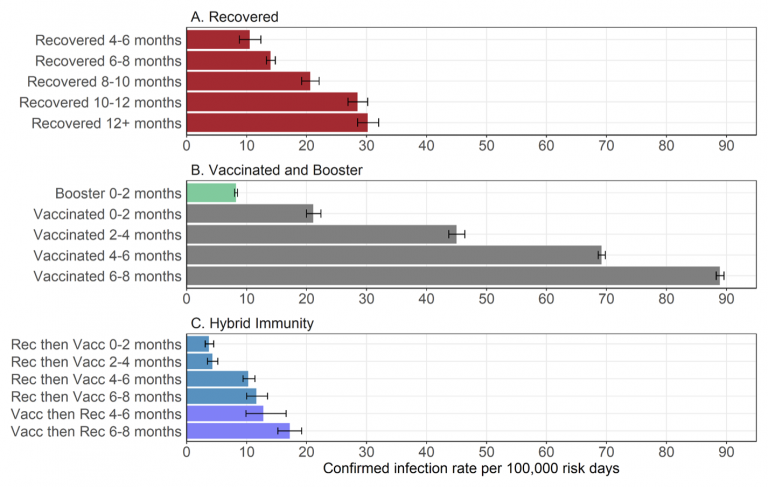 Notice that the labels for the horizontal bars are not the same for each group. Since we want to compare apples with apples, look at the bars labelled “Recovered 6–8 months” and “Vaccinated 6–8 months”.

This comparison shows that, 6–8 months after the corresponding event, infection rates were more than six times higher among vaccinated individuals – 89 per 100,000 versus only 14 per 100,000 among previously infected individuals.

Goldberg and colleagues’ study confirms that natural immunity does wane, though much more slowly than vaccine-induced immunity. Anyone claiming the contrary now has to contend with not one, but two, high quality studies.